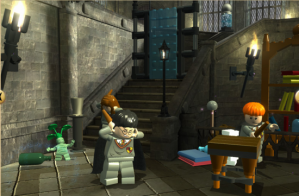 Like any good partner, I make it a point to immerse myself in the interests of my significant other. That’s why I didn’t blink when my wife-to-be asked me to pick up Travelers Tales’ LEGO Harry Potter: Years 1-4 for the Xbox 360. Well, actually I did blink…and I put off her request for few days. Even though I really enjoyed playing Lego Star Wars, Lego Indiana Jones, and Lego Batman with my girlfriend, I was still a bit hesitant. You can attribute this hesitance to my complete and total lack of interest in the Harry Potter universe. You see, I was in my late teens when the first book made its debut and I was in College when the first film hit the screens, so I guess I’ve always felt that I was too old to enjoy the Harry Potter series. I realize how ironic that last statement is, coming from someone that still collects and occasionally plays with Lego sets. Eventually, I caved-in and donned my controller in the name of love. To my surprise, I grew to like the game. Actually, I liked it enough to spend twenty-four hours (over a period of two weeks) running around Hogwarts (which, apparently, is a wizard school and not a medical condition). So if you’re like me and have never delved into J.K. Rowling’s novels of wizardry, but have have enjoyed past games in the Lego franchise, read on.

Lego Harry Potter: 1-4 continues the LEGO video game franchise that started with the 2005 Lego-ization of the Star Wars prequels. Games in the series have all followed a similar, yet fun, approach to gameplay–smash anything that can be smashed, and build anything that can be built. It’s definitely a simple approach to gaming, but it works. In Lego Harry Potter: Years 1-4 players must learn new spells as well as solve some very light puzzles– all while collecting as many Lego studs as possible. Getting through the levels requires players to use their characters powers to surmount certain obstacles; for example, Ron Weasely can control his pet rat, giving him access to small pipes; Harry potter can don a cloak that renders him invisible; and Hermione later gains the ability to turn into a cat that can dig up hidden items and pathways. As players traverse levels based around scenes from the first four Harry Potter films they will also have the opportunity to find hidden items.

Gamers who enjoy re-playing past levels in order to unlock items will find lots of replay value in Lego Harry Potter. Scattered throughout every level are character tiles featuring characters from the various Harry Potter films. Discovering and collecting character tiles makes them available for purchase. The destruction of miscellaneous in-game objects creates Lego studs that are collected and used as in-game currency. Using collected Lego studs, players are able to purchase character tiles, cheats, and gold bricks from a few specialty shops. As if collecting eighty or so character tiles wasn’t enough, there are also four crests (each one representing one of the four houses) hidden in each level.

While most of the collecting takes place in-game during levels, there are also crests, character tiles, and gold bricks to be found around Hogwarts campus (which acts as a world hub). Most of the various collectable items require a second play-through of any particular level, as most items are only accessible with the spells of certain characters.

Lego Harry Potter isn’t a groundbreaking game. It’s the same Lego video formula we gamers have come to know in the last five years. Having said that, however, the game is still dammed good. It’s a charming game with enough variety to make the brief story campaign interesting– even if, like me, you’re a Harry Potter novice. Story wise, if you’re unfamiliar with the plots of the first four films, then the cute pantomimed cutscenes will seem a bit strange. Similarly, the abundance of unlockable characters might appear a bit daunting (about 80 in total), especially for gamers who aren’t well versed in Harry Potter lore. Luckily for me, my fiancee has read the novels and was more than happy to inform my lack of knowledge. Actually, the best thing about Lego Harry Potter is playing with a friend.

The real fun in Lego Harry Potter is the cooperative game play. My fiancee and I had a blast playing through the twenty or so campaign levels. The Harry Potter iteration of the Lego video game formula places an emphasis on cooperation and light puzzle-solving rather than on destroying enemies. Actually, some levels are completely devoid of enemies. This lack of enemies puts less pressure on staying alive, allowing room for gamers of all levels to proceed without too much frustration.

As we played the game, I felt that in spite of the game’s lack of computer controlled enemies, I was nevertheless still having fun shooting miscellaneous bric-a-brac and assembling the often charming solutions to environmental puzzles. The puzzles aren’t complex and very often involve either simple pattern repetition, the building of platforms, or interacting with NPCs. The game also facilitates co-op play by adding a new feature: split-screen co-op. This new addition to the Lego video game franchise (it was first implemented on Lego Indiana Jones II) splits the screen whenever you and your gaming partner are separated. Previous Lego games forced players to stay in close proximity by re-spawning players. Needless to say, this is a welcome addition to the franchise that will hopefully be included in future Lego games.

Lego Harry Potter: Years 1-4 manages to conjure up the same charming gameplay and item-collecting that’s become a staple of Traveler’s Tales Lego franchise. If you’re looking for a video game to play with that peculiar Harry Potter fan in your life, you should definitely pick this game up.

This review was previously published at http://www.aeropause.com.

View all posts by John Gonzalez

Super excited to play FORK from designer @tatewu1 on tomorrow's Cribbage & More stream. We'll be checking out the two player mode after our weekly Cribbage game! Come by and hang out!
ANNOUNCEMENT: I’ve been enjoying Hadrian’s Wall so much that I’ll be streaming the solo campaign on stream. Every Tuesday in February will be Hadrian’s Tuesday on my Twitch channel! Come by for live plays and the usual shenanigans!
Played the solo mode for Verdant today. It’s got that puzzly aspect that I love for solo games. Can’t wait to play it some more.
When you play a point-and-click game starring Christopher Lloyd, you just gotta do it.
Join me tomorrow (12/6) for some chat and a solo game of Shake That City! from publisher @alderac and designer @MadsFloe
That time Master Goblin Showed Up For Tabletop Live Network.
Loading Comments...
%d bloggers like this: